Today, I wanna tell you a short but loving story: of those ones with a sad and tragic start but with a happy ending. The story of those daily heroes that in between the shadows have big responsabilities in becoming foster fathers of orphaned babies elephants: the Keepers… 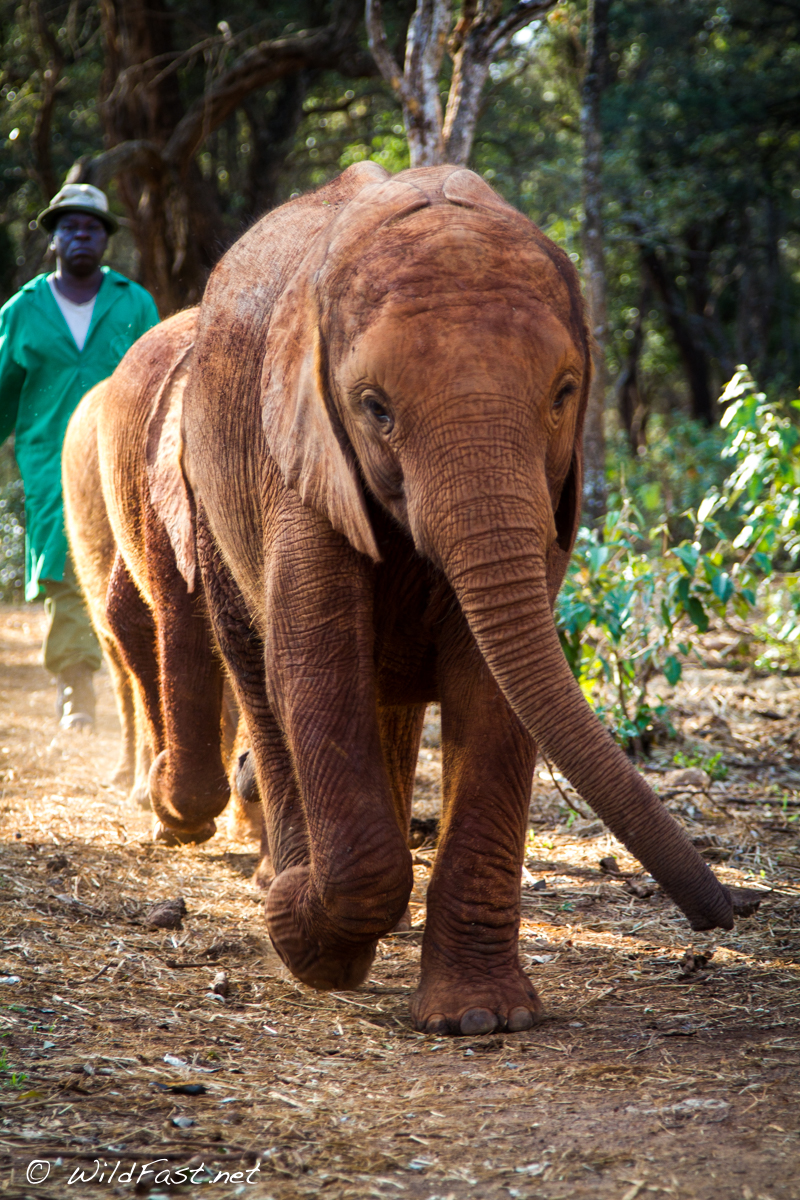 Orphans coming back home from their daily walk in the wild..

Nowadays it’s in broad daylight that poachers are daily killing a huge amount of elephants for the ivory trade business that mainly involve china. Given that the primary market, China, has a booming economy and growing middle class, more people are willing to spend more money for ivory products, which are seen as status symbols. Many estimate that ivory prices have risen tenfold over the past five years. As a result, poaching has now evolved into a highly sophisticated trade.

A century ago, there were maybe around 5 million elephants across Africa. Now there are less than 500.000. Savannah elephants declined by 30% from 2007-2014 and forest elephants by 60% from 2002-2011. While unrestricted international commercial trade in ‘new’ ivory is banned (CITES 1989), many countries continue to allow some form of commercial trade in ivory, legal and note, within and across their borders. Increasingly, these domestic markets are being recognised as significant drivers of elephant poaching and ivory trafficking.

Poverty is the primary driver of poaching in Africa. But increasingly, poaching is being carried out by heavily armed criminals who operate like gangs. Crime networks in both Africa and China are behind much of this poaching activity. 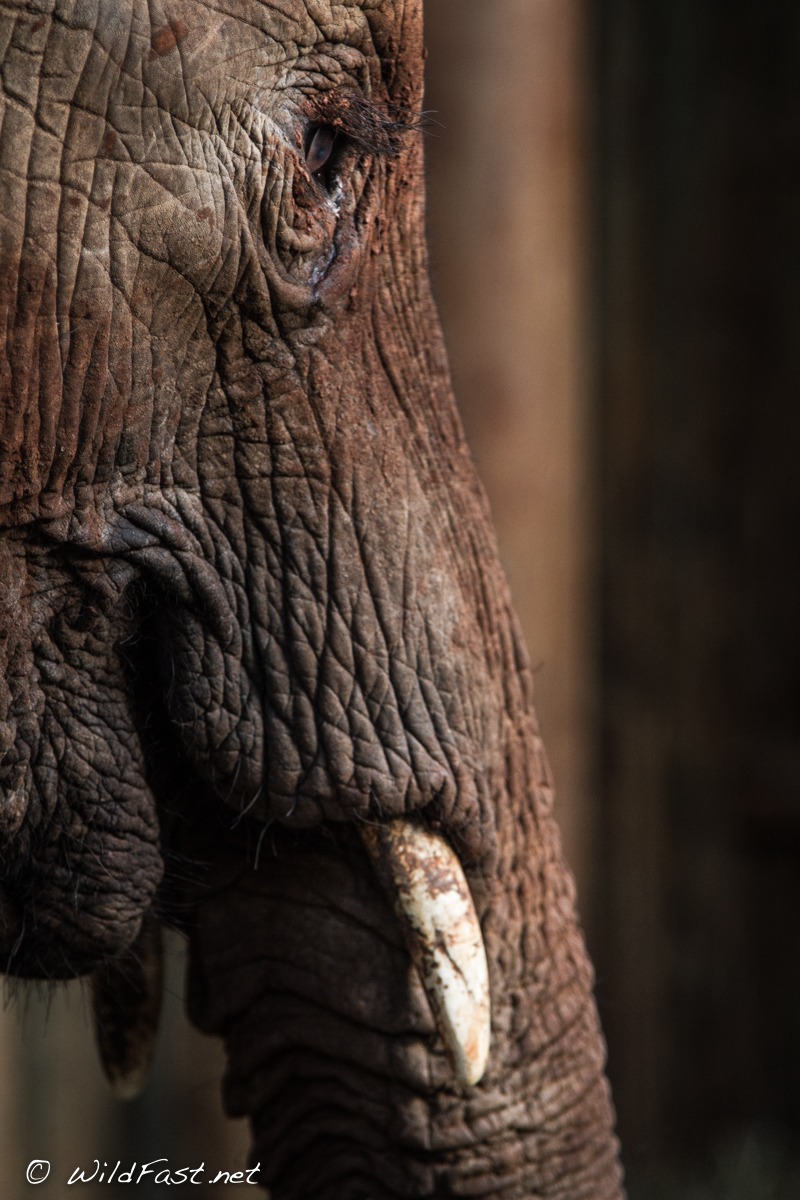 Kelelari, approx 4 years old, orphaned and found in the plains of the Masai Mara where he has been rescued

Like I wrote in a previous articole (wild drafts..on ivory), at Nairobi National Park on 2016, tusks from more than 6.000 illegally killed elephants has been burned: the biggest ever destruction of an ivory stockpile, about 105 tonnes of elephant ivory and 1.5 tonnes of rhino horn burned in 11 large pyres. The rests have been left in place to remember this hecatomb and many tourists are took there during their safaris to commemorate this monument.

After the recent death of Daphne Sheldrick, 83 years old, how to not mention who is doing a daily hard job in the wildlife conservation. Dame Daphne helped save the lives of more than 230 elephants – many of which had lost their mothers to poachers or drought – by developing a milk formula and successfully rearing them. Her Kenyan charity is world-renowned for its care of orphaned elephants. Dame Daphne “lived alongside elephants and learned to read their hearts”, read a statement on her charity’s website. 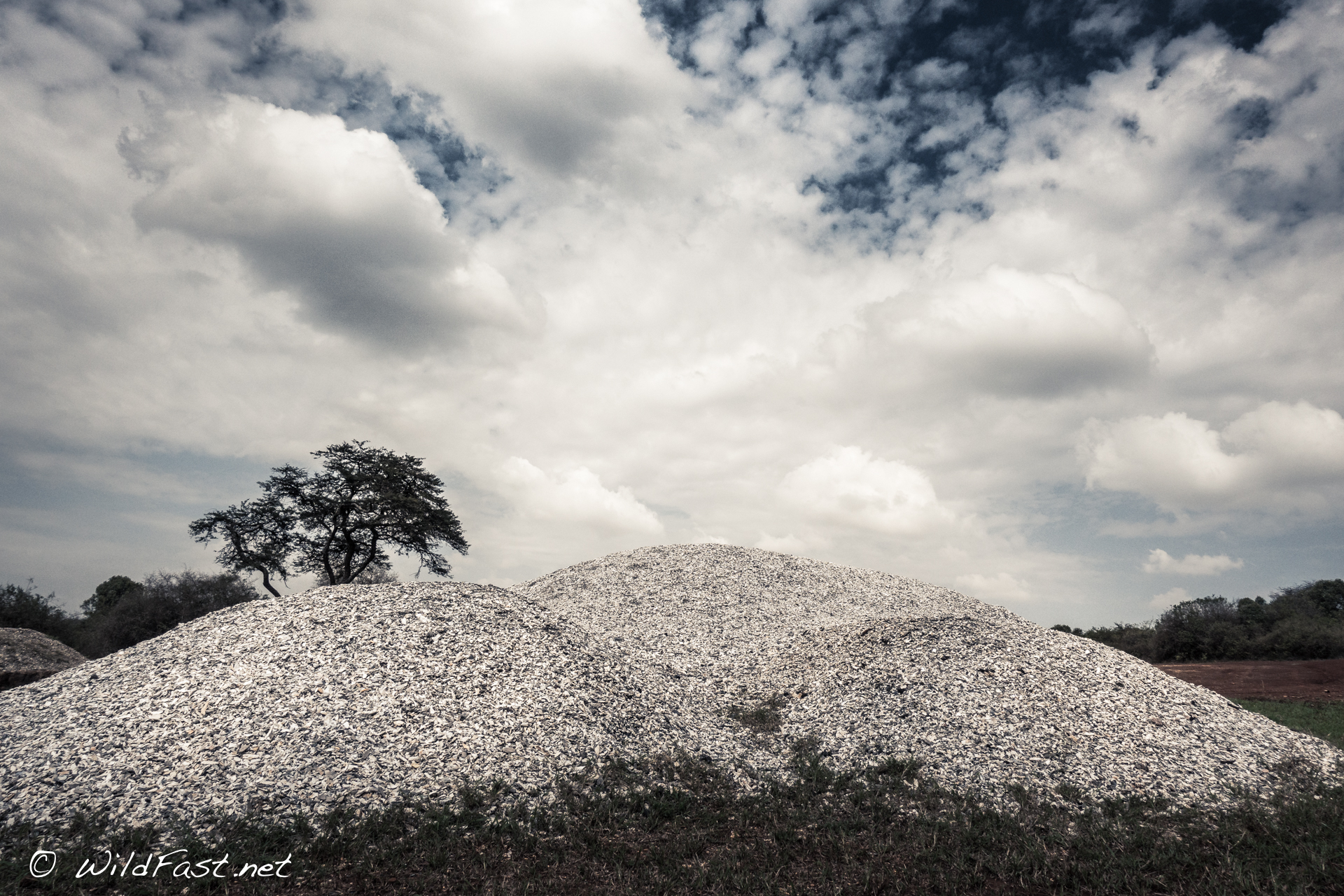 Rescued orphaned infant elephants arrive at the Sheldrick’s Nairobi Nursery severely traumatised by the events that have caused the separation from their mother and family killed by the poachers. Their rehabilitation success comes from a  special milk formula developed over years of trials and errors combined with the correct intensive and hands-on husbandry, which involves a human ‘family’ (the Keepers) who replace the lost elephant family and stay with the orphans in the Nairobi Nursery 24 hours a day, sleeping with the infants during the night on a rotational basis.

Keepers work on rotation to avoid a calf becoming too attached to any one person and pining when that person has to take time off. To a baby elephant, who is emotionally very fragile, it is the family aspect that is all important. Elephants are tactile and highly social animals, so the human “family” is always encouraged to be in physical contact with the babies as much as possible, talking to them and demonstrating genuine heartfelt affection, as would their elephant family. 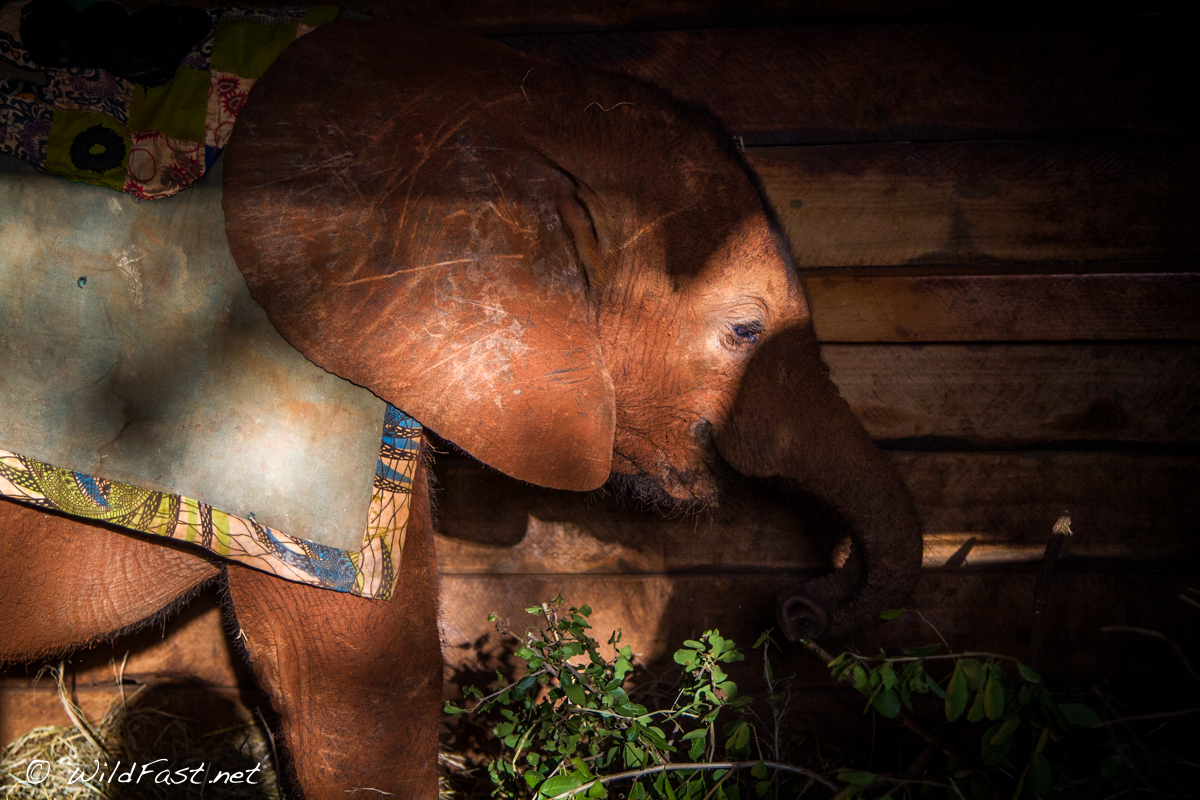 A baby elephant in the nursery..

Orphans must be watched at all times and their Keepers must protect them with blankets when cold, rainwear when wet and sunscreen and an umbrella when exposed to sun during the first 2 months of life. Infant elephants are also difficult feeders and the Keepers need endless patience to encourage the calf to take sufficient milk to sustain their life and help them to thrive. 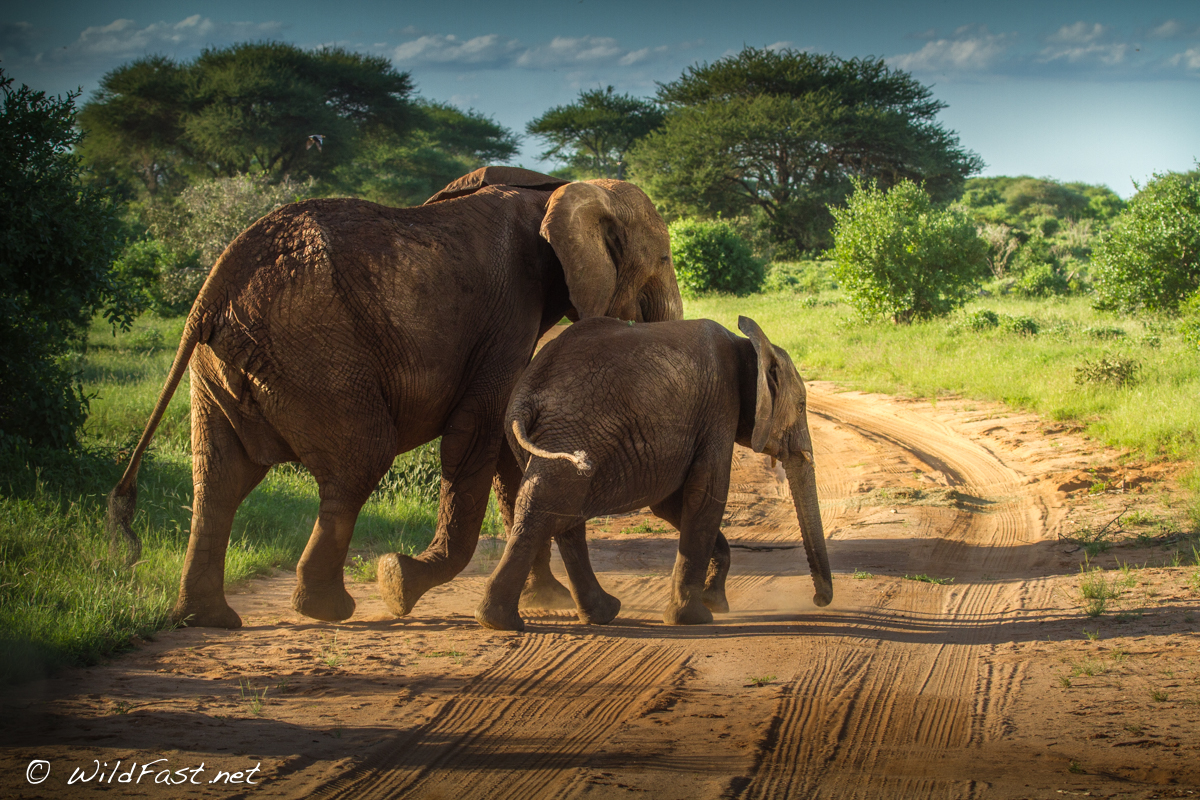 An elephant’s family crossing my road in the Tsavo East

Like human children, baby elephants need toys and stimulation. Highly intelligent, with a giant memory, they duplicate human children in many ways, so during infancy distractions of all sorts must be built into the daily routine. The Keepers take the orphans on walks in varied surroundings with unlimited access to nature’s toys such as sticks and stones, plus artificial playthings such as rubber tubes and balls. Cause for celebration is when a baby elephant plays for the first time, because only then can one be sure of a reasonable chance of success as an elephant will only thrive if they are happy.

The third and fourth milk dependent years are weaning years, when both the quantity and frequency of milk feeds is gradually reduced as the calf ingests larger quantities of vegetation. Elephants need a varied diet comprised of several different plants as well as the bark of trees which contain the minerals and trace elements needed to build and strengthen such huge bones. This plant selection is instinctive within the genetic memory given at birth and not something that has to be taught by a human. 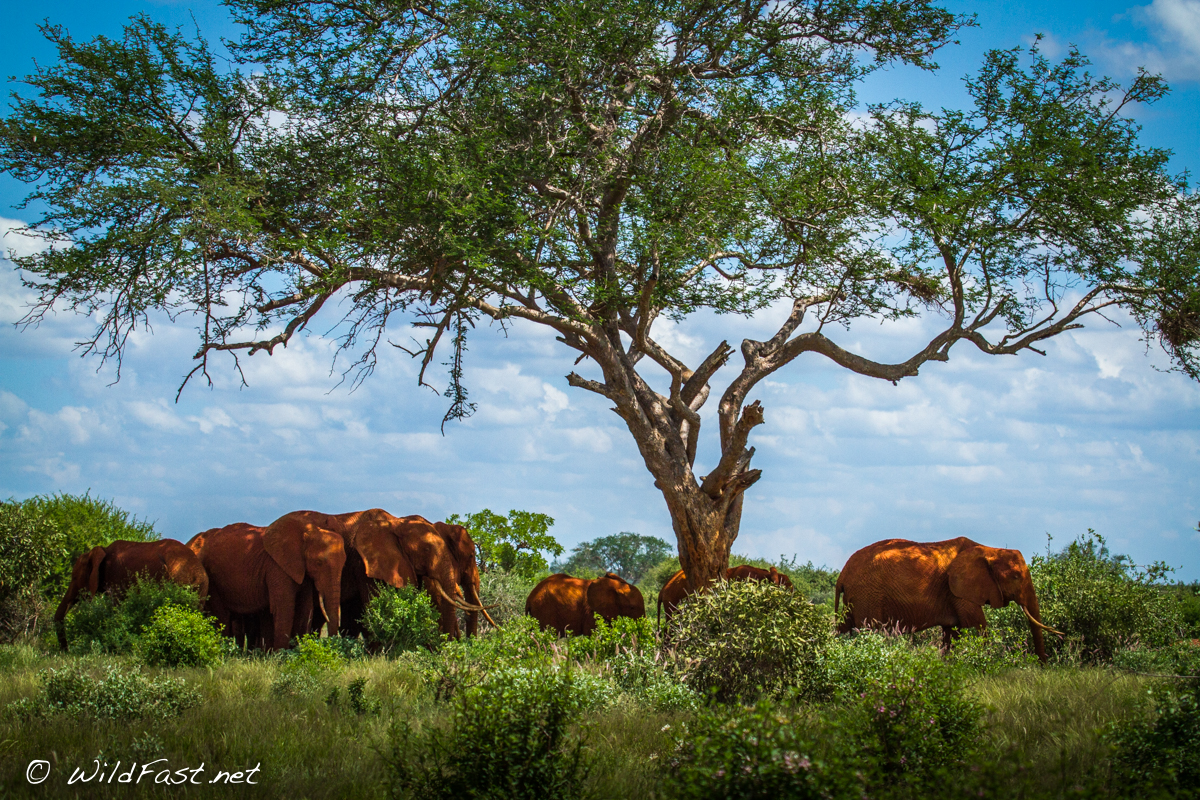 When, after some year, they become fully independents, they are finally released back into the wild so they can join a herd and create hopefully their own family.

As you see, Keepers have a main role in the rehabilitation of the elephants and their daily mission is contributing substancially in saving a big part of the wildlife and…of ourself.

If you want to contribute, you can be part of the fostering program at distance with a minimum amount of 50 US $ per year.. you will not regret it! Here the link where you can contribute: Sheldrick Fostering Program